To make this ham and vegetable soup, you need to have made my slow cooked gammon ham as you need the stock which is left over from cooking.

This is a warming and filling soup which can be adapted to what you have at home and is a great way of getting more meals out of your joint of meat.

Just like with anything blitzed, pureed, or mashed, soups have been cooked down and often blended. This means that your body has to do less work to break down soup and glucose will be released faster into the bloodstream.

To help this, when making soup it’s better to eat it chunky and increase the protein and fat in the soup to help slow down the release of glucose.

It’s tempting to pack your soup with lots of heart healthy ingredients such as grains, beans, lentils, chickpeas and other pulses. Although these foods are good nutritionally and some contain good amounts of protein, they also contain carbs and so many ladies still find soups bulked with these things harder to tolerate. 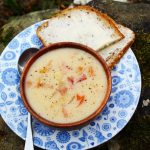 The cream in this soup transforms it into a creamy soup which is paired slightly more than without. However, it you do not like creamed soups or would prefer it without, then it still works.

Avoid adding sweetcorn, potatoes and anything which is higher in carbs which will make the soup more difficult to tolerate. Adding butter beans increases the carbs, but still adds some protein, but they also help to thicken the soup and bulk it up without having to add too much ham which helps to stretch the meals made from the gammon ham joint further.

☀️You may find a big difference in your blood

And it’s live! The new membership recipe for a n

The same day I cracked the vegan & nut free Millio

Sharing again... One of the most commonly seen pie

I’ve shared the ones to avoid, so it’s only fa

The weather is warm, lots of BBQs going on and lot

Carbonara is made up of very GD friendly ingredien

Being able to help any mother diagnosed with gesta

Eid Mubarak! I wish you and your families a very j

I see SO many Mums struggling with figuring out wh